How the Duchy gets rid of the kingfisher.

The Prince of Wales often mentions his 'potty' concern for the environment and his 'green efforts' to make things better. However, when he says, "Get into Woodlands", he means that the exploitation of woods is lucrative. It might be 90 years since conifers were planted among the broadleaf in Perdredda Wood and now the loggers are busy. They are cutting those spruce but also the native trees that survived the first phase of land use.


The best forest in Cornwall was owned by Port Elliot Estate until 2019. Spruce had been planted but indigenous trees were conserved in some acres and along the boundaries (between the plantations and the surrounding farm fields.) The broadleaf has been the life-saver for many species including wild birds, most of which will not visit spruce for food or nesting. (Woodpeckers this year preferred a dead broadleaf to the many spruce nearby, which harbour none of the insects that they collected for their chicks: video.)
Now, the tradition of letting broadleaf survive in the margins and along the streams is being abandoned: The margins are getting smaller/disappearing and all of the Alders that lined the streams are being cut down: survivor. 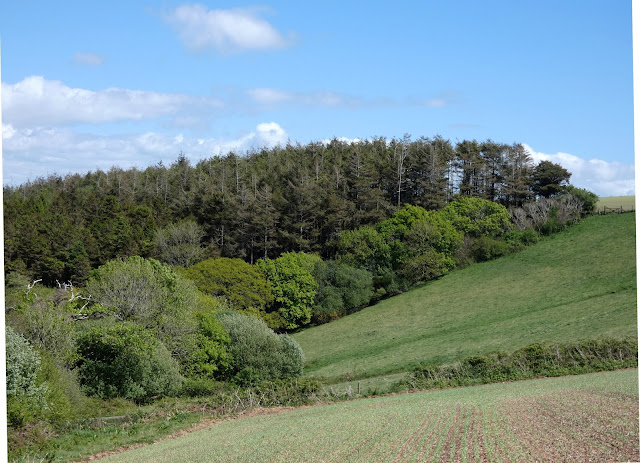 When the Duchy of Cornwall acquired Perdredda Wood in 2019, they sent a man to see if he could cull some deer: fcb. Loggers began to grade and widen the old forest tracks, removing all wild plants and the soil that was under them. Before long, it could be seen that a simple instruction was being followed: ‘Clear some big areas and cut all trees in those areas.’ This is known as ‘clear-cutting’. 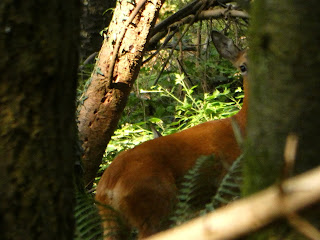 October 2020: The Duchy has set up a rota of three marksmen who arrive at the end of the day. They wait to pick off Roe deer that walk onto the newly cleared sections in the twilight. Each man brings a silencer and tripod with his rifle, locking his 4x4 with custom reg. number (e.g. “ROE 3“) inside the new steel gate. The deer will probably nibble at newly planted saplings but the amount of ‘culling’ is disproportional to the number of animals on the property: Not a penny is spent on counting them first. 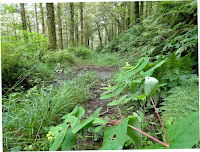 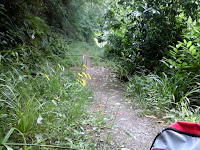 .
On Google Maps, the Wood looks as it did in 1888. The sea is only two kilometres to the south but higher land in between reduces the impact of sea winds. All around is crop fields or pasture but wildlife survives where there are trees.

The warm Gulf Stream brings humidity to southeast Cornwall and there are good rates of plant growth. However, what remains of original woodland is mostly in places that cannot be developed (e.g. slopes next to rivers and estuaries.)
Species-rich places like Perdredda are hard to find but she’s being logged now as a great northern forest might be, like those in North America and Eurasia.
N.B. Viewed from the outside, the stands of spruce appear to be monoculture but there are many broadleaf among them which do not grow vertically at the same speed and, therefore, are hidden by the spruce. Using Google maps to view from above reveals many broadleaf in every area of Perdredda. 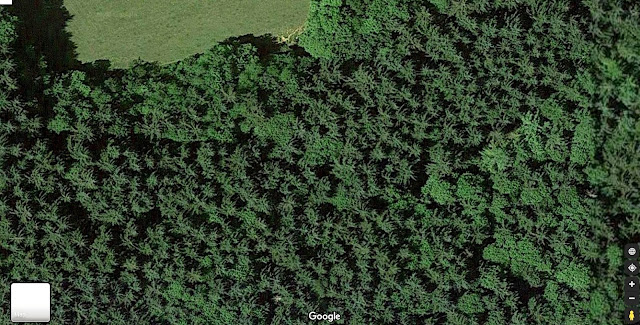 If you paste 50.385349, -4.337496 into Google Maps  and zoom right in, you will see the difference between the star-shaped spruce trees and the lighter-coloured broadleaf. If you return to the map later you will notice that you have developed a skill for spotting the broadleaf and that there were many throughout the forest. (Fresh images would show three naked areas, devoid of all trees.)

In March 2020, an Oil beetle was found in the in 2.8 acre plot that has no conifers because there are power-lines overhead: bit.ly/oilBe (then another one was 600 metres upstream from there: bit.ly/mOilb.) 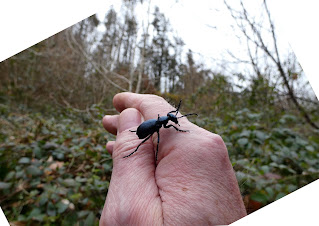 This cold-hardy Violet Oil Beetle (Meloe violaceus) was active on 18/03/2020 in the 'butterfly zone'. Power-lines keep the foresters from utilizing that 2.8 acres but they could put one of their wide tracks through it to access the outer plantation.

Perdredda has riparian habitat because it has natural springs and six or more slate-bed streams that merge into two main branches. (Those two merge at 50.387173, -4.334081 and continue north for about 300 metres before crossing under the A374 through a man-made weir.¹)
At one time, all trees in Perdredda were broadleaf, most of which is deciduous (called ‘hardwood’ by loggers.) When Sitka spruce were introduced, some acres were left in their natural state. Broadleaf also continued to grow among some of the spruce, often becoming taller than usual in competition for light with them, e.g. the top photo and aqatree. A uniquely 'Perdredda' heredity might exist among the original plant-life, e.g. The bluebell gene pool might be ancient.
¹(The weir prevents sticklebacks from swimming up into the woods' streams. Beavers, recently released nearby, will also never get past it.) 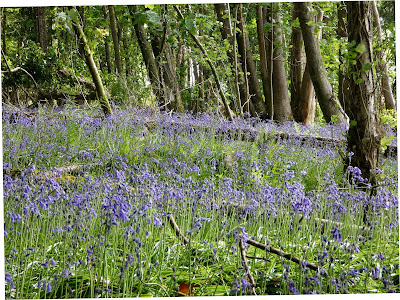 (12/05/2020) There are three modest stands of original broadleaf in Perdredda. This is where the biodiversity is and where woodpeckers get grubs for their nestlings: video
What's new?
Between June and October 2019, the Duchy's contractor cut down every tree in three big areas: bit.ly/perocto (The central area had no spruce and everything cut there was native.) It was hoped that a line of broadleaf might be left standing which was along the north-western border at the top of the first slope they'd cleared, but those trees are gone now as well: bit.ly/whyo. (They were along 400 metres of the fence running east from the top of Berry Plantation: bit.ly/gratna.)
By 08/01/2020, large trees in the bog habitat next to the east-west stream have fallen over where they are no longer shielded by adjacent trees. All but one of the water-loving alders along that stream have been cut. (One survives because it's on its southern side: aqatree.)
The wild plants on the forest tracks have been erased. (Sunlight reaches the tracks and at least 20 types of flowering plant had colonized them.)
December 2019: Conifer saplings are being planted in place of the diverse flora that’s been removed. Nothing will restore the communities of small organisms that were on the mature broadleaf: the invertebrates, fungi, epiphytes (mosses, liverworts, and lichens.) Birds and squirrels needed the broadleaf.
The pleasant meadow with log-pile visible on Google maps at 50.384837, -4.342052 has been made bare. (Its amphibian breeding pond was filled straight away.)
May 2020: Small saplings of a few broadleaf species have been planted along the stream in the eastern felled area, but a wood-pecker, jay or nuthatch can’t make much use of a 9 inch sapling. The kingfisher won't explore that stream now with no mature broadleaf to use as cover. (It seems the small population of Roe deer is being killed to protect those saplings.)
Perdredda's unusual pollinator habitat should be protected.
The rest of Perdredda will receive the same treatment in seasons to come. More logging and re-planting will ultimately turn the whole Wood into a plain crop with no wildlife. 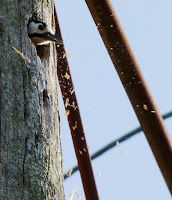 Clear-felling is practiced across the UK and a quantity of wildlife disappears every time. Owners who suspect that wild species might damage their cash crops will keep quiet as what remains of the biodiversity is removed. 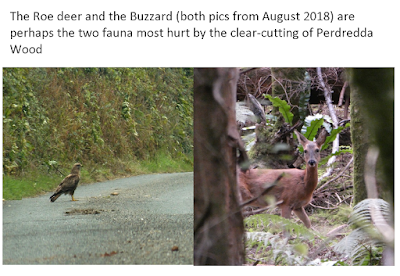 Prince Charles says, “Work with Nature” but his men show no compromise with Nature. They filled a solitary amphibian breeding pond straight away because it wasn't far from where their vehicles might go. A few years ago in a valley nearby, they cut this beautiful tree for no reason: bit.ly/kilhaw

In the areas now cleared, all of the water-loving Alder trees along the streams are gone. Alders stabilize wet land and enrich habitat, e.g. by shedding leaves which are eaten by aquatic insects.
First photographed in June 2019, along the east-west stream just before the loggers arrived: 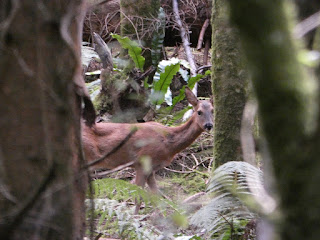 The Prince of Wales promotes the eradication of Grey Squirrels and once he posed with a fluffy Red Squirrel toy. Does this really mean that he plans to reintroduce the Red Squirrel in Cornwall?

In a recent episode of BBC Countryfile, it was told that most baby Red squirrels die during the felling of trees because they are still in the dreys when the trees fall down. (Some loggers leave a tree standing when it has a drey in it, although living in an isolated tree is also precarious for the squirrels.)
The clear-felling in Perdredda confirms that the Duchy never lets any tree get in its way. Grey squirrel dreys in its forests might provide a convenient excuse for cutting everything? As Perdredda is becoming quickly degraded through the cutting of native trees, it will soon be poor habitat for any type of squirrel. Therefore, the Duke’s interest in squirrel control seems more to do with extracting a maximum yield than with bringing back the Red Squirrel. (His support for Grey squirrel eradication might help create a persona that seems ‘scientific’, but he never mentions the plight of so many other forest species facing Britain’s huge demand for wood.)

The Countryfile guest said that our conservation laws have no control where felling operations are taking place (i.e. in most of the privately owned woods in Britain) and that forestry legislation is outdated. (It's 800 years since any real progress has been made in favour of appreciating natural woodland: ox/woodland?) Nobody tags along to see what loggers are cutting down. Shouldn't there be a law that protects a certain percentage of all woodland sites from being 100% utilised for timber? 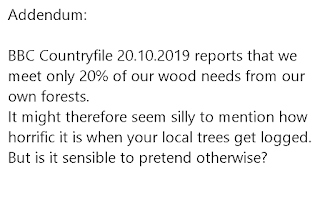 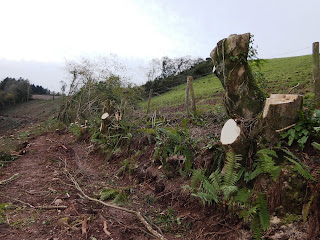 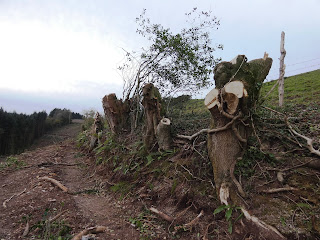 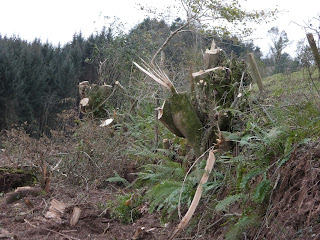 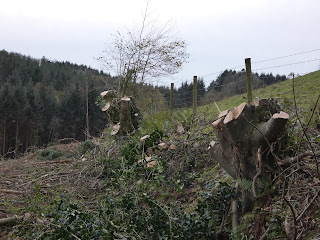 Now is a time of ‘woodland propaganda’. There is a new article in which the Forestry Commission suggests that loggers have brought woodlands back to an ancient quantity, but they don’t mention that medieval woods were full of biodiversity. Men are employed who copy-and-paste pleasing phrases about their felling operations, knowing that very few will walk in and see for themselves.

11/07. The contractors have been back to clear the trees that fell over. You can
see the path that branches upward which was such a nice place before May last year.